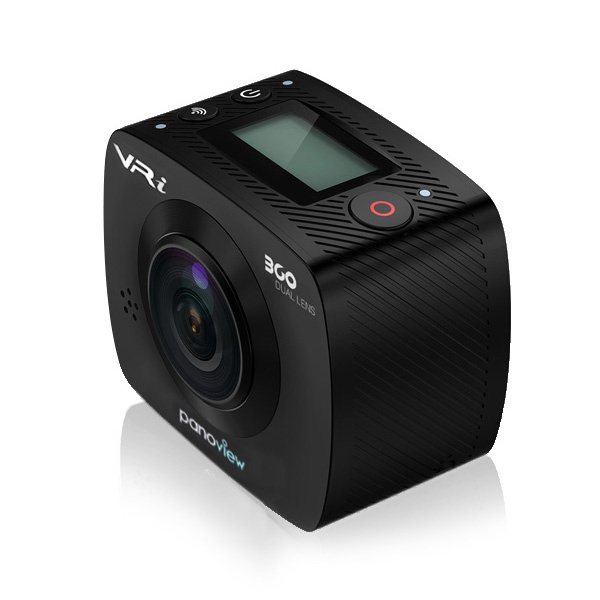 Purchase this 360 ACTION CAM at bol.com:

De VR-i 360 ACTION CAM is a 360 degrees camera which makes it possible to create a 360 degree image in a single shot without displaying any visible transition. Due to the supplied strong waterproof casing and the mounting accessories you’re able to capture your actions in any weather condition and easily share with your friends in 360 degree footage. The mounting accessories are interchangeable with those of GoPro and can therefore be expanded afterwards. For a stable positioning at all surfaces, the camera is supplied with a tripod with anti-slip at the end tips. When folding the tripod together in your hand, it can be used for shooting footage by hand.

The footage taken by the 360 camera can be directly streamed or played on your smartphone or tablet via the free download of the SYVR360 app. The app will play any movie or picture taken.

By pressing a single button, your footage can be transferred into a 360 movie which can be uploaded on YouTube or shared on any other social media platform. This can be simple done by using a converter which can by downloaded for free at www.symax360.com for both iOS and Windows.

This camera is perfect for extreme sports, youtubers or fun shots for social media purpose. Do you like the latest trends and techniques and do you want to share your experiences with your friends? Then you should try this camera!

How does the VR-i ACTION CAM work?

2)    Place the camera, depending of your footage, in the watertight housing.

3)    Press the on/off button for 3 seconds until the device says “Welcome”.

7)    Turn off the camera by pressing the on/off button for 3 seconds.

How does the converter software operate.

1)     Download the free Symax 360 Video Converter for Window and iOS software at www.symax360.com

2)    Install the converter by clicking the downloaded file.

5)    Click on the icon left below and the converter opens.

6)    Press start and the movie is converted.

Below movies are recorded with the VR-i 360 ACTION CAM. Check below movie. This movie must be watched in the YouTube app or Google Chrome.